The PlayStation 3 is getting a party-brawler game. For the first time characters from across Sony’s video game universe are gathering under one title for a knockdown, drag-out fight. Although it won’t be out until later this year, a very early version of PlayStation All-Stars Battle Royale was unveiled this week for myself and other members of the press to test out. While the demo contained just six characters and four levels from the many to be included, it’s clear the game will spark enthusiasm and is bound to be compared to Super Smash Bros., Nintendo’s own brawling party game made up of video game stars.

There are a number of stark differences. The PlayStation world is a far, far, more diverse one and so you have cutsey kid-rapper Parappa using his skateboard and boombox to deliver a beatdown against serial killer clown Sweet Tooth. Drawing upon titles from across the ESRB ratings codes, other fighters and potentially strange matches include Radec from Killzone, raccoon thief Sly Cooper, vengeful God-hunter Kratos, and demanding ruler in pink, the Fat Princess.

The game’s levels, the backdrops that provide the arenas for the battles draw upon a number of unexpected franchises including the Buzz trivia games, the Hot Shots Golf series, Little Big Planet, and tribal strategy game Patapon. 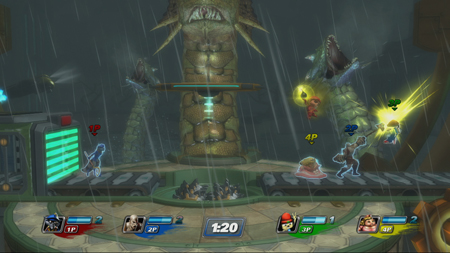 Each character has two dozen different attacks in addition to the ability to block, pick up weapons, and trigger different super powers based on energy collected from successful attacks. The controls are simple, three buttons for different attacks mixed with three directions of movement. There’s no set pattern for combos, allowing you to invent your own, and for balance, every character can trigger an interrupt to disrupt a combo.

Although the basic exchanges seem to be the same at first, there’s a lot of running, jumping, bouncing, and trading fast, frenetic blows, each character has a distinct style, from Radec’s long range gun attacks to Parappa’s short-range martial arts, Sly Cooper’s stealth, Sweet Tooth’s explosives and gadgets for controlling spaces to keep others from using them. 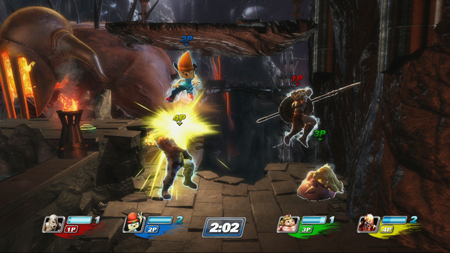 As players trade blows they earn energy toward a meter that unlocks super powers of different levels including vehicles such as a battle suit for Suit Tooth, a rocket pack for Sly Cooper, and even a giant chicken for Fat Princes, each flashing into existence with an entertaining and eventful cut-scene.

My favourite element has to be the dynamic environments, each offering a little story for those who pay close attention. You have a Hydra in the God of War level that tries to eat fighters, a metero shower that rains down on the Hot Shots Golf course, and a Buzz trivia game that pops up in the middle of the physics-driven Little Big Planet level. By far the most popular, and the one that promises we’ll see much creativity and cleverness when the game finally arrives, is the take over of the Hades level by a surprise invasion of Patapon warriors. 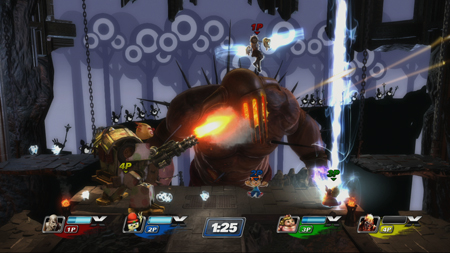 PlayStation All-Stars Battle Royale may draw upon a very familiar idea, but it does so really well, finding creative ways to bring together the widest mix of popular characters and show it show great potential for being a fan obsession when it comes out later this year.