A collection that refreshes three Super Mario adventures, Super Mario 3D All Stars also includes the soundtracks for all three games, just as you’d find them if bought on CD or iTunes. We use snippets of Mario’s themes on our weekly Tech Corner radio report on CJAD, so it’s a delight to explore the music here and be reminded of just how varied it can be and what a range of musical themes are reached. 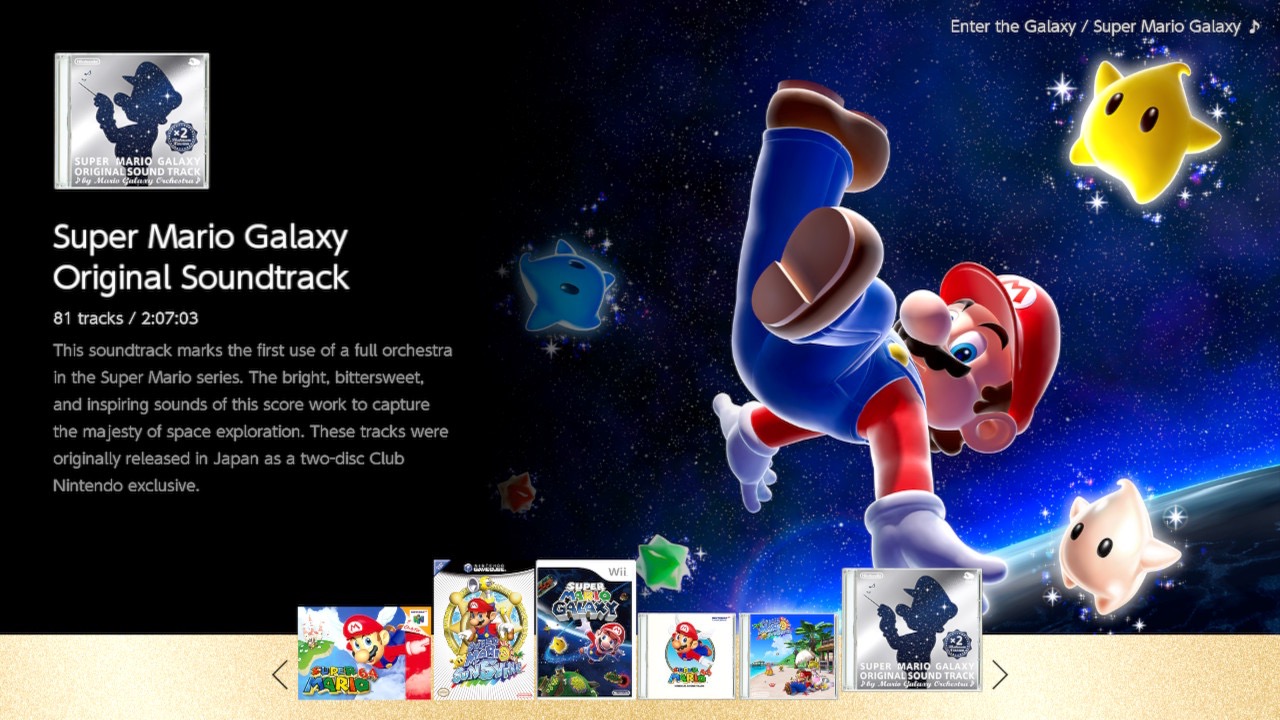 I played all three games when they were originally released, jumping into paintings in Super Mario 64, riding water jetpacks in Super Mario Sunshine, and blasting from planet to planet in Super Mario Galaxy. All three were exceptional fun and for the Switch Nintendo has done a professional job of giving them a higher resolution polish, translating the older controls and avoiding the drag of games originally made for slower systems.

Of the three, I consider Super Mario Sunshine the best and so offer up my original review, written in 2002.

Super Mario Sunshine is the kind of game that if you were to wake up tomorrow and people around you told you that it didn’t really exist, that it was only in your dreams, you could believe that. It is the ultimate example of creativity, discovery, innovation and imagination. Here is one of the oldest game genres, a tried and true formula, and Nintendo has managed to re-invent it with fresh wonders and delights. From its viscous battle between water and sludge, to Mario’s tightrope jumping, gate flipping, belly-sliding journey through an island world that truly seems to have no limits, it is a platform game that puts all others to shame.

Leaving for vacation, Mario and Princess Peach fly with an entourage of toads to the tropical paradise of Isle Delfino. Known for its bathing sunlight, its natural wonders, and its succulent seafood, it would seem to be the perfect place to relax, but the island is under attack by a strange goo, a sludge-like substance that seems to be connected to a rash of graffiti attacks by a strange, elusive plumber who uses his high-jumping ability to stay beyond the reach of authorities. His likeness to Mario is uncanny and as soon as Princess Peach and her party arrive on the Island, the local authorities mistake Mario for their menace and take him into custody. After a short trial, Mario is sentenced to clean the sludge away and is imprisoned on the island until he does so.

Visually, Mario’s world seems to be without limits. It is sharply rendered in 3D, detailed with attention, and expansive both in the height of its skies and the breadth of its horizons. Not only can you climb up to an upper level of rooftops and jump from one store canopy to the next, but with the right coin you can have yourself launched up high into the stratosphere. Leave the beaches and enter into the ocean, and you’ll find the lapping waves and strong currents can lead you to smaller islands and underwater coral worlds if you’re willing to fight the currents and swim long enough.

The game plays with liquid in a way never done before. Not only does the sludge that is infecting the island look like a fluid, but it behaves like a fluid. When Mario steps through it, he leaves footprints behind him on clean ground. If he should fall into or come into contact with the sludge, you’ll find the bits of his body that came into contact with it dipped in the stuff. When Mario cleans away the sludge with a stream of water, you’ll find that it’s only the bits that the water reaches which disappear. No matter how thorough you are with your cleaning, there will always be small drops or little pools of the gunk left in some corner. This is on top of other special effects that also include realistic flames, the reflective surfaces of solar panels, and the wispy presence of air creatures.

To battle the situation, Mario has been given a full assortment of abilities. On top of the usual grab, toss, jump and double jump, he is now capable of a spinning jump, a triple jump, a back flip off a wall move, a ground pound, a belly slide, a grand slam, and a wall kick. Experiment with these long enough and you’ll realize that there’s no corner of the game out of reach, and there’s definitely the Easter egg rewards there when you do.

To battle the sludge, Mario is equipped with a FLUDD device, a backpack water tank that can spray out a stream of water through various nozzles. The basic nozzle allows you to shoot out a stream of water, fireman style. A second nozzle will allow you to turn the tank into a jet pack and actually hover through the air on streams of water. As you complete the game, you’ll find other nozzles to play with, a rocket nozzle, a turbo nozzle, each allowing Mario to use the water pressure in the tank in completely new ways. The water in the tank, of course, runs out after awhile, and your forced to jump into the nearest fountain, sprinkler, or ocean to refuel. It’s a great invention, and the dynamic of spraying the water, not just to battle the sludge and the enemies that it creates, but to use it inventively, such as propelling a floating leaf as you would a speedboat with a motor, is addictive, pleasurable fun. There’s one part in the game where you can use the FLUUD to shoot inflatable pigs. Again, there’s no limits.

The game is structured into island territories, each divided into episodic missions. Overall the goal is to locate and rescue the Shine Sprites, the star-like beings who help direct the sun’s rays down onto the island world. Each has been captured by the sludge and its monsters and by finishing an episode of the game, you’ll rescue one Shine Sprite. The island begins in partial darkness, and as you rescue the stars, the darkness begins to retreat and new elements of the game begin to appear. A set of graffiti portals will lead you to other territories in the game, each offering a different feel and a different style of challenges. There’s a harbour, for instance that is caged in with a system of fencing which Mario has to monkey-climb (complete with monkey noises) his way through. There’s a theme park filled with roller coasters and water rides, each with their own challenge. The sludge itself is different, ranging from taffy-like brown goo to black tar, to rainbow paint, to simple sludge floating on the surface of a lake. You can never, never guess what’s waiting for you next and because of that it’s wild trip of pleasure and wonder.

The episodes themselves each offer up a different style of challenge. It could be something as simple as tracking down a set of red coins, or something as difficult as cleaning up a sludge network complete with a complex boss monster. Some of the episodes will lead you to hidden levels, surreal and shifting planes of floating blocks and bizarre traps. Your FLUDD is taken away from you during these trials and it takes good ol’ fashioned eye-hand coordination to overcome them.

Side quests abound, to entertain you between episodes, including scripted events where Princess Peach is, yes, again and again kidnapped and Mario is sent to rescue her. There are fires to put out, fruit to gather, mini-games to try your luck at, and a certain green dinosaur to unlock (who as it turns out can’t stand water). As with all Mario games, there are times in which the gameplay becomes incredibly hard, and as in the past there are ways to skip past the tougher levels. Scattered all throughout the game are blue coins, and it’s with these that players having a tough time can buy their way past the harder levels.

Super Mario Sunshine is an exceptional game. It is a bigger achievement than the Mario games of the past. It’s not just a leap above what we’ve seen before, not just on the GameCube, but also on other games systems, it’s also a tremendous leap above the other platform games currently in development. I’ve had a chance to play the early builds of Star Fox Adventures, Blinx: The Time Sweeper, Sly Cooper, and Ratchet & Clank and none of those games, which are not even finished yet, can hope to come near the level of creativity, personality, and imagination that Nintendo has found through Super Mario Sunshine. It is that good of a game and anyone who calls themselves a gamer should experience it. 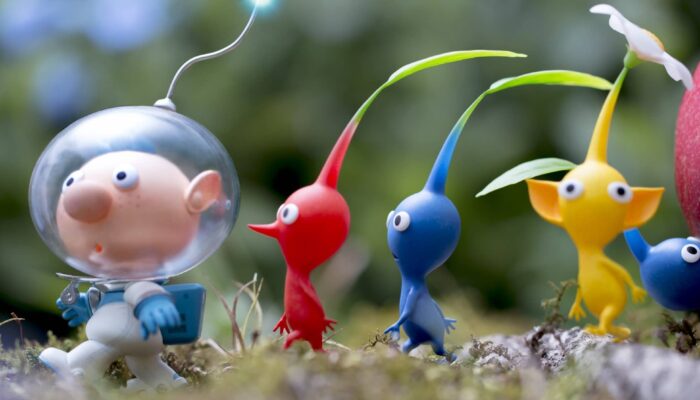 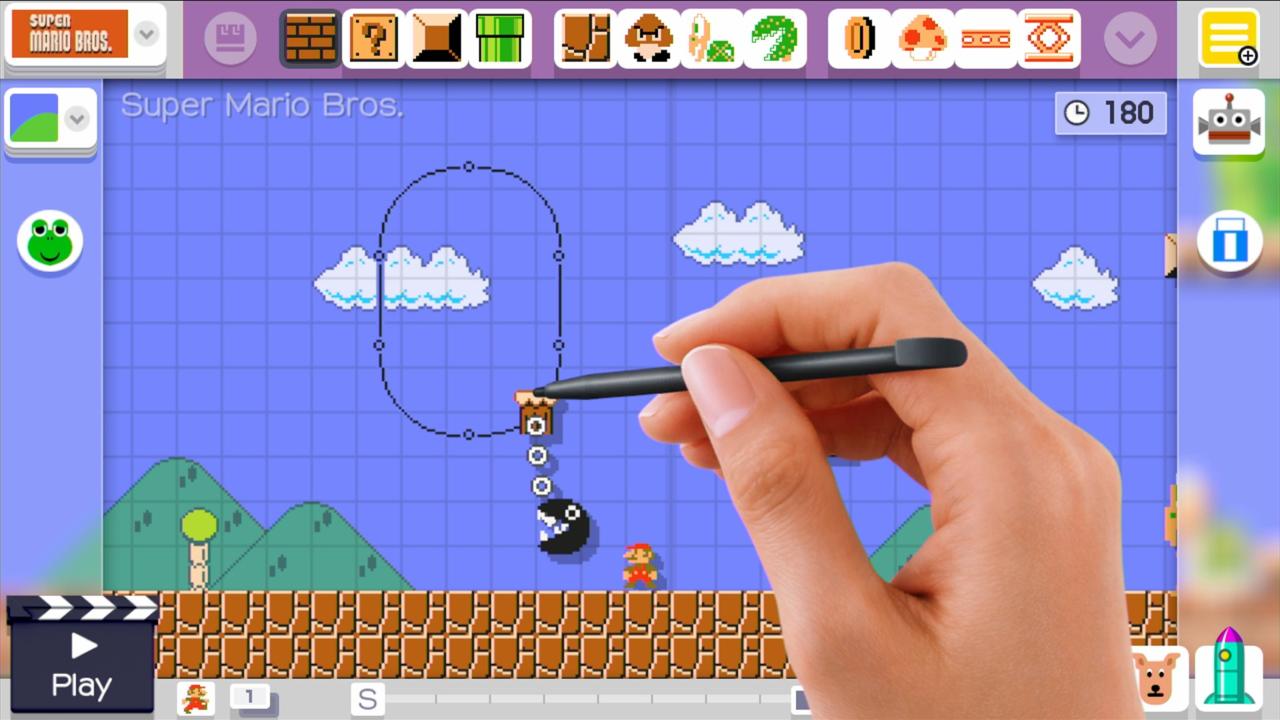